for defining I tried using Google search which gave me the following result :-                               define: Gender Policing
Gender policing is the imposition or enforcement of normative gender expressions on an individual who is perceived as not adequately performing, through appearance or behavior, the sex that was assigned to them at birth (see gender performativity).

Okay, let me start with my little experiences in recent days about the same. How deeply few wrong things get instilled in our brains? It is just amazing to see around us.

Being a person who is not very selective about colours, I have always found myself in a great dilemma when someone asks this common question "which colour do you like?". For me the whole spectrum of visible light is equally beautiful (along with black and white too). I do not not find any difference in my excitement when there is a change in colour of anything. Yeah but sometimes the intensity of brightness or glitter affects.
So, the other day I bought an earphone. What I did not notice or did not care to notice was the colour which was pink. And I did not realize how big of deal it was until I witnessed the reaction after 3-4 weeks when one of my friend saw it while I was using it. He gave such an overreaction that I felt something disastrous happened. He was stunned and made such a posture like I've been through an accident and he came over to see me in the hospital and suddenly he found out that I lost my leg or something.
Joke's apart that day I realized that abstinence from just one colour has defined my friend's masculinity overall. And I don't know why he was feeling so emasculated just to see one pink coloured earphone with me. It was like he has been taught the day colour pink touched you consider yourself out of the male community. But for me things are different. My masculine identity is not limited or dictated by colour or any other traditional trait attached by any orthodox section of the society.

In one other incident, one of my female friend mentioned that her father was going to visit her again. With a little smile on my face I said " I've not been visited by my father since the first time I took admission in my first college, its just that I go visit". I said it just for no reason, I think it popped up in my mind from nowhere. Interestingly, her reply to this was a common one for everyone else sitting there other than me. She said it is because you are a "boy". It was not quite expected. Actually I wasn't expecting any reply at all.
I resisted and said It depends on personal choice, availability of time and all other situational constraints but it can't be related to gender. She said no I am girl that's why my father visits me. I said how is it possible "do parents love their girl child more?" (because this doubt I have in my mind from my childhood). Now the reply was "No, there are safety issues".
This seemed even more illogical to me. I found two hidden embarrassing meanings in this reply. First of all she is not acknowledging the parental affection and love to be the reason for the visit of her father. And secondly only girls have safety issues. This is the serious denial which leads to many undesirable situations. There is one more point, it could be related to one more embarrassing fact that girl child is kept under more control.

I might be feeling a little twisted but I guess above mentioned people are not wrong in the sense that they are just doing what they have been seeing. What they have been told is right, they are following it in the best ways they can. I might say that I was shocked to see their reactions but I am fully aware that it was not totally unexpected.  I would say it came from the people whom I regard as educated and literate ones. I was more shocked to see where these reactions are coming from.

I found this post which appeared on sociological images from Lisa Wade is a professor of sociology at Occidental College, few interesting lines of which I am quoting here :
"The phenomenon of being questioned about one’s performance of gender is called “gender policing.” Generally there are three ways to respond to gender policing:
(1) apologize and follow the gender rules,
(2) make an excuse for why you’re breaking the rules (which allows you to break them, but still
affirms the rules), or
(3) do something that suggests that the rules are stupid or wrong.
Only the last one is effective in changing or eradicating norms delimiting how men and women are expected to behave."

In the same post she also gave examples of the two famous personalities doing the last one
1. first example is given by a picture depicting the interview of Eddie Izzard amazing reply to the question-
(Q)    why he wears “women’s dresses,”
(A)   “I’m not wearing women’s dresses. I’m wearing my dresses. I bought them. They are
mine and I’m a man. They are very clearly a man’s dresses.” 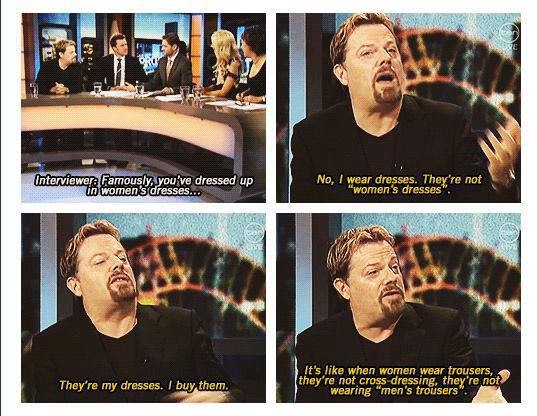 2. In second example she gives a video of an interview of Johnny Depp with David Letterman in which he is wearing a (so called) women's ring :


I regret that in the "pink earphone" case I chose the respond in accordance to the second way mention in Dr. Lisa's post.  I told him (which was in fact the truth but not at all related to the context in which I presented it just to calm him down) that "It was the last piece remaining in the offer that day so I found it at much cheaper price and didn't care about the colour. I think I did it under pressure from the kind of massive reaction that I got from him. Succumbing to reactions from society is the last thing I would want to do. Still I succumbed to the simplest dramatic incident that day. Hope I shall never do that again.
Labels: Change Fact Gender equality Hope Optimism Women